What’s in a name?

Three sections, two counties, a village, a hamlet, a city subdivision (and a partridge in a pear tree?) There are three Bellerose sections: the Incorporated Village of Bellerose in Nassau County, Bellerose Terrace, an unincorporated hamlet in the town of Hempstead, within Nassau County; and finally, the Queens section of Bellerose , referred to as Bellerose Manor, which lies within the New York City limits.

There are a number of conflicting theories as to how Bellerose was named. One long standing theory states that in 1906 when Mrs. Helen Marsh of Lynn, Massachusetts purchased 77 acres of gladiola fields in Floral Park and set out to create a model community adjacent to the Long Island Railroad, she convinced the LIRR to build a station, and call it “Bellerose”.  While some say the name derives from the nearby Rose farm and from the name of her daughter Belle, Mrs. Marsh explained years later that she chose the name because it sounded “euphonious”. However, that’s not the final word…Some say the name actually came from the Belle Rose, a variety of flower advertised in the seed catalog of local grower, John Lewis Childs, in the early 1900’s. Yet another theory states that in 1893, the Citizens Real Estate of Brooklyn, which planned a development that never got off the ground, picked the euphonious name and got the LIRR to build a station which was listed in the LIRR timetables as early as 1898.

Whatever the origins of the name and the railroad station, it is certain that the development of Bellerose Village is to be credited to Helen Marsh. She supervised the construction of the first house in 1910 and lived in it until a buyer was found. She went on to reside in each new construction prior to its sale, ultimately living in 22 of the homes. By 1924, Bellerose was incorporated as one of the smallest villages in New York State. In fact, the village contains less than 400 homes.

Bellerose Terrace, developed in the 1920’s, was made up of two large farms that met at what is now the Cross Island Parkway. The origin of the name Bellerose Terrace is also uncertain. According to a book on the history of Nassau County towns, the Village was laid out on a higher grade than the area to the west. Hedges separated the areas creating a terrace like effect, thus, Bellerose Terrace.

The Queens section was commonly known as Bellerose Manor. Development began around 1910, though most construction took place in the 1920’s and continued through the 30′, 40’s and 50’s. 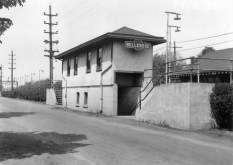 Above are a few photos that look back into Bellerose History. The Bellerose Theater (top right) is still standing today. It is now a Martial Arts Academy.

Kelli’s Ice Cream was a summer hit throughout the 60’s and 70’s until the property was sold to a bank. Today it is home to New York Community Bank.